PBX Engineering was presented the Mavis Johnson Award for our design on the Variable Speed Limit System (VSLS) which celebrates technical excellence in the field of road safety.

The award was presented by Mavis Johnson herself at the Canadian Institute of Transportation Engineers – Greater Vancouver Section awards gala on December 7th, 2016.  PBX Engineering was recognized for their contribution to the design and implementation of a Variable Speed Limit System which is operational on three major BC highway corridors. 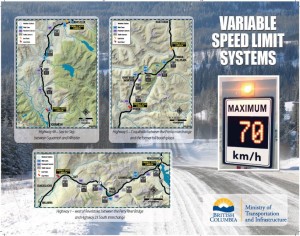 This pilot project of the BC Ministry of Transportation and Infrastructure aims to use smart technologies to reduce the frequency and severity of weather-related motor vehicle accidents caused by excessive speeds that are inappropriate for existing weather conditions.

Thank you to CITE – Greater Vancouver and the BC MoTI.