PBX Engineering was the prime engineering consultant and lead design firm for the Variable Speed Limit Signs (VSLS) system, which is now live and operational on three major BC highways (Highways 1, 5 and 99). This pilot project of the BC Ministry of Transportation and Infrastructure aims to use smart technologies to reduce the frequency and severity of weather-related motor vehicle accidents caused by excessive speeds that are inappropriate to weather conditions.

The project required the design and installation of 47 high-tech digital signs on the three highways: 18 signs were installed along Highway 1, 13 on the Coquihalla and 16 on the Sea-to Sky between Squamish and Whistler. The remote-controlled digital signs are programmed to immediately react to road condition variations brought on by quickly changing weather. Highways through the Rocky Mountains in BC often pass through varying climate zones, and with changes in elevations weather can change quickly and dramatically; often from dry and sunny to wet and foggy, or snowy and icy.  The signs and speed limits are managed by the Regional Traffic Management Centre (RTMC). RTMC staff respond to data received through an integrated and sophisticated system that receives continuously updated information from an extensive array of traffic, pavement and visibility sensors that detect weather and road conditions. In order to assist motorists and enhance their safety the VSLS system display maximum speed limits appropriate to current driving conditions requiring drivers to reduce their speed in bad weather. 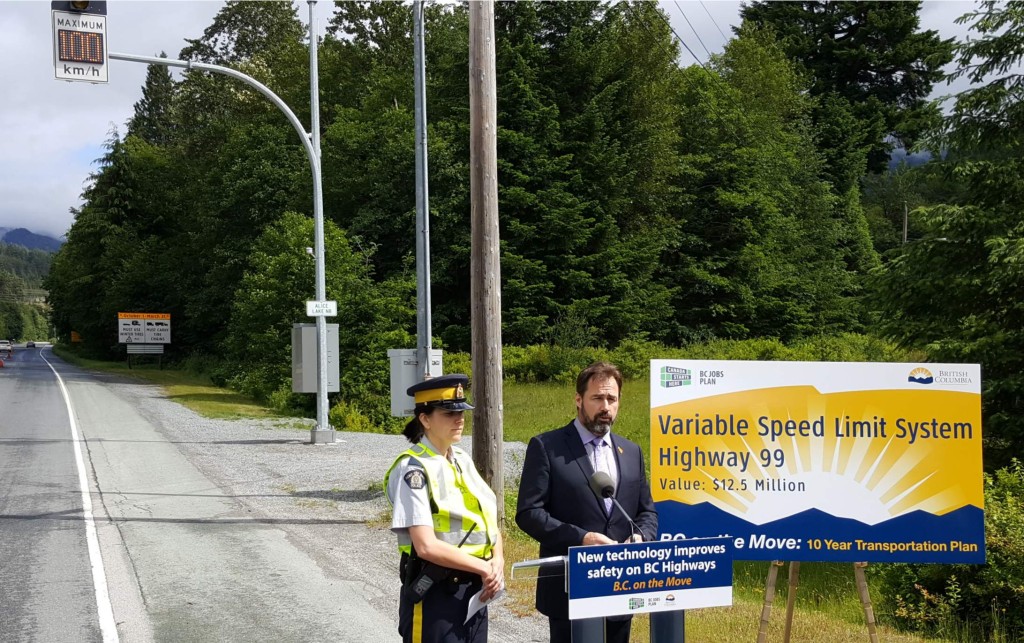 The BC Ministry of Transportation and Infrastructure announced on June 2nd that the Variable Speed Limit Signs system is now live. PBX Engineering received invitations to the unveiling and official launch of the project for Highways 1 and 5  in Kamloops by the honourable Minister of Transportation and Infrastructure Todd Stone, and for Highway 99 by West Vancouver’s MLA Jordan Sturdy. The short video below from Global News describes, in some detail, the mechanisms and benefits of the Variable Speed Limit Signs system.

In addition, as part of the VSLS pilot project, PBX Engineering also lead the integration and installation of twelve new webcams along the three highways. The live feed, via the DriveBC website, assists motorists to monitor road conditions in the Variable Speed Limit zones.